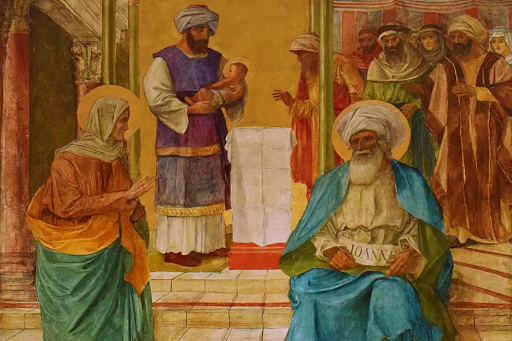 No Christian disputes the fact that St. John the Baptist, the forerunner and martyr who prepared the way for the Messiah, was a righteous man.  His cousin, Jesus himself proclaimed, “…among those born of women there has been none greater than John the Baptist; yet the least in the kingdom of heaven is greater than he” (Mt. 11:11).  In context, Jesus was defending John’s character against those who found fault with the Baptist and accused him of being a false prophet.  Christ emphasized that among all the prophets of the Old Covenant who pointed to the Messiah, John was not only one of them but the greatest of them.  The Catechism summarizes the esteem with which the Church has always held St. John:

John the Baptist is “more than a prophet.” In him, the Holy Spirit concludes his speaking through the prophets…. (CCC 719)

St. John the Baptist is the Lord’s immediate precursor or forerunner, sent to prepare his way. “Prophet of the Most High”, John surpasses all the prophets, of whom he is the last. He inaugurates the Gospel, already from his mother’s womb welcomes the coming of Christ, and rejoices in being “the friend of the bridegroom”, whom he points out as “the Lamb of God, who takes away the sin of the world”…. (CCC 523)

Notice the part in bold?  It’s this scriptural event that serves as the basis for the pious assertion that St. John the Baptist was free from original sin, the privation of grace, at a certain point in his mother’s womb.  A Catholic who knows his or her faith might interject though, “I thought Jesus and Mary were the only ones never to have had original sin,” and this would be a correct conclusion. The key is that neither Jesus nor Mary were conceived with original sin, nor did they personally sin during their lifetimes (they did not have concupiscence or the weak tendency to prefer sin over virtue).  If John received sanctifying grace before he was born, it nevertheless happened after his conception. Therefore, he was conceived with original sin (the condition of lacking grace), as we all are, and he also had concupiscence.  But can it be demonstrated that John did receive a kind of pre-natal “baptism”, that is, a reception of the indwelling of the Holy Spirit?  If so, when did this happen?

Let’s reflect on the holiness of Christ and Mary first. As all Christians acknowledge, Jesus, fully man, is completely sinless ipso facto because he is fully divine in nature too.  According to Catholic dogma (divinely revealed truth infallibly defined by the Church), Mary is also sinless because of a singular privilege of prevenient grace, which protected her from the stain of original sin at the first moment of her existence and filled her with the Holy Spirit.  In other words, her divine Son’s redemption worked retroactively to prevent her from entering into a fallen state so that she would respond to and carry out her special mission as Mother of the Savior (Jesus saved her but in a different way).  Scripture and Tradition refer to Jesus as the new and Last Adam (1 Cor. 15:22) and Mary as the new Eve (Gn. 3:15).  The old Adam and old Eve were created in a state of original holiness and justice, but separated themselves from God and forfeited their supernatural inheritance. The new Adam and new Eve were also created (as human beings) in a state of grace, yet both obeyed the Father and retained their love for Him.  Only Jesus and Mary had complete impeccability during their earthly lives, a condition all the saved will enjoy in heaven. 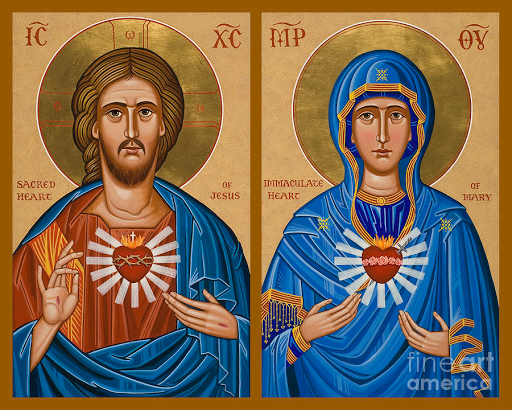 Back to Baby Baptist

So unlike Jesus and Mary, St. John the Baptist was conceived with original sin, but can we pinpoint an early stage where he did receive grace?  There is evidence in both Sacred Scripture and Sacred Tradition which shows God sanctified John after his conception but before his birth to prepare the Forerunner for his later mission as the last and greatest prophet who would herald the coming of the Christ.

An article on Mary’s Immaculate Conception at the online Catholic Encyclopedia contains a section on the conception of John the Baptist and highlights this belief in his pre-natal holiness:

The soul of the precursor was not preserved immaculate at its union with the body, but was sanctified either shortly after conception from a previous state of sin, or through the presence of Jesus at the visitation. 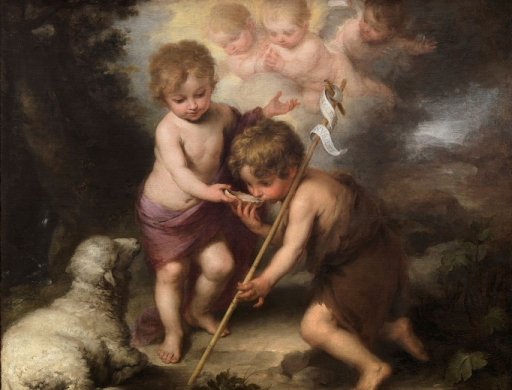 But where in the Bible can we find such proof?  The gospel of Luke provides the clearest evidence. In announcing the Forerunner’s coming birth to John’s father Zechariah, the Angel Gabriel promises:

“And you will have joy and gladness, and many will rejoice at his birth, for he will be great in the sight of [the] Lord…He will be filled with the Holy Spirit even from his mother’s womb” (Luke 1:14-15).

Notice, that Gabriel points out John “will be filled” with the Holy Spirit. The Greek verb is πλησθήσεται (plēsthēsetai), a future passive tense, indicating that the indwelling of the Spirit within a person will occur. Later, when the Blessed Virgin, pregnant with Jesus, visits her cousin St. Elizabeth, who is pregnant with St. John, Elizabeth exclaims:

“When Elizabeth heard Mary’s greeting, the infant leaped in her womb, and Elizabeth, filled with the Holy Spirit, cried out in a loud voice and said, ‘Most blessed are you among women, and blessed is the fruit of your womb. And how does this happen to me, that the mother of my Lord should come to me? For at the moment the sound of your greeting reached my ears, the infant in my womb leaped for joy.’” (Luke 1:41-44)

Luke points out that Elizabeth was filled with the Holy Spirit, and the Lord inspires her to proclaim those famous words of Marian veneration which are recognizable as part of the “Hail Mary”.  Yet, Gabriel’s promise to Zechariah also appears to have its fulfillment. Although still hidden from the world in his mother’s womb, St. John intuitively rejoices in the presence of the unborn Christ child, whose Spirit touches the Forerunner’s heart.  Pope Innocent III appears to interpret this moment in Scripture as John’s unmerited reception of grace.

“John the Baptist, sent by Him, was holy and just, and in the womb of his mother was filled with the Holy Spirit.”(“Eius exemplo” Letter to the Archbishop of Terraco, Dec. 18, 1208) 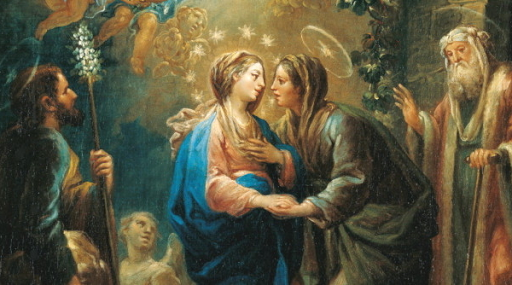 What Did the Doctors Say?

Not an OB/GYN obviously, but a church doctor (teacher)– a saint whose writings are held to have universal benefit for the whole Church, and several of them believed in St. John’s pre-born sanctification. In his Summa Theolgiae, Question 27, Article 6, Replies to Objections 2 & 3 St. Thomas Aquinas, the Angelic Doctor, supports this belief and even makes the case that John’s sanctification provides support for infant Baptism since God retroactively infused saving grace for John before birth. In John’s case, the amniotic waters substituted as the waters of Baptism through which the Holy Spirit sanctified him.

One might object and point out that an adult St. John later proclaims to Christ, “I need to be baptized by you, and do you come to me?”. Doesn’t this show that he was not sanctified in the womb or not yet “saved” in an initial sense?  No. John’s expression is one of humility before the Lord, who had come to model obedience, repentance, and solidarity in receiving John’s symbolic baptism (even though Christ did not need any form of baptism).  John demonstrates that he, like all disciples of Christ, can and do sin; thus the need for repentance and continual conversion is ongoing.  Aquinas points this out, stating that unlike Jesus and Mary, St. John most likely had venial sin, but not mortal (see Question 27. Article 6. Reply to Objection 1),

However, some saints speculated St. John never sinned throughout his life.  St. Catherine of Siena, a Doctor of the Church, declared so when she examined her own struggles:

“Wretch that I am! John the Baptist never sinned and was sanctified in his mother’s womb. And I have committed so many sins…” — A Treatise of Prayer, (1370)

A Catholic is not bound to hold the belief that John never personally sinned though. 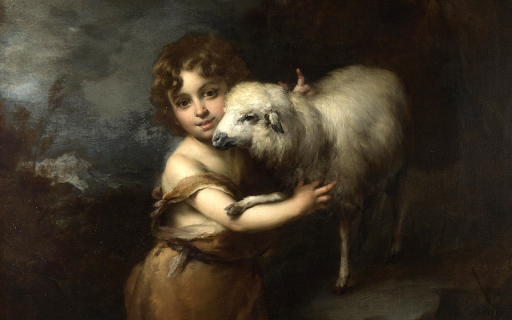 Although the timing of John’s justification has never been dogmatically defined, another papal pronouncement does add more weight to the pious belief in John’s pre-born holiness.  In 1894, Pope Leo XIII, in his encyclical Iucunda Semper Expectatione, a reflection on the rosary, explicitly taught:

Then St. John the Baptist, by a singular privilege, is sanctified in his mother’s womb and favoured with special graces that he might prepare the way of the Lord; and this comes to pass by the greeting of Mary who had been inspired to visit her cousin. (#2)

Pope Leo seems to confirm that 1) John enjoyed a unique privilege of prenatal sanctification; 2) he received special graces; and 3) this all happened when he leapt at the sound of Mary’s voice. 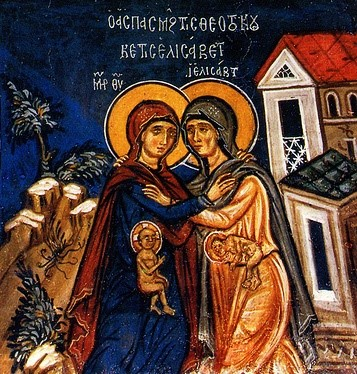 Because St. John the Baptist seems to already have been a saint at birth and in light of his important mission and martyrdom for Christ, his birthday, June 24th is one of only three birthdays celebrated on the Catholic Church’s liturgical calendar.  The other two are Jesus on December 25th and Mary on September 8th.  It is also noteworthy that the Church, since ancient times has also celebrated the conceptions of the same three: St. John on September 23rd, Mary on December 8th, and Jesus on March 25th.  Count nine months ahead in the cases of Jesus and Mary and one calculates a perfect nine months of gestation in the womb — a symbol of the perfection of the persons (although Mary’s conception was immeasurably below that of her divine Son).  St. John misses this perfect calculation by a calendar day, symbolizing that he was conceived with a fallen nature.  Regardless, he lived a life of exemplary devotion to God, remaining faithful even to the point of martyrdom. Holiness is not about starting out perfect though, but trusting Christ, the perfect man, to help us through our struggles and achieve restoration in his image and likeness: to love God and man without impediment. 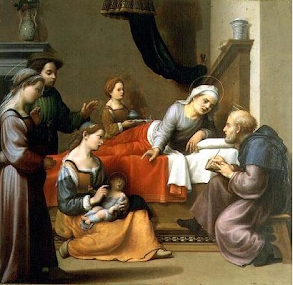 In the Maronite Catholic calendar, St. John’s birth is also commemorated on the third of six Sundays during the Eastern Advent season called “Happy Announcements” or “Annunciation”.  The Baptist is one of the universal Church’s models for Advent, since he prepared the way for Jesus and looked forward to his coming even from the womb. Advent calls upon all of us to relive the ancient expectancy for the Messiah, rejoice in his abiding presence now, and look forward to his future coming with the consummation of his kingdom. But every life is an Advent, a preparation to meet the Lord face-to-face one day and be fully transformed in Him.  Therefore, the Church highlights the humility of the Baptist as a virtue to imitate:

By celebrating the precursor’s birth and martyrdom, the Church unites herself to his desire: “He must increase, but I must decrease.” (CCC 524)

A final note: John’s universal birthday on June 24th is six months before Christ’s birthday on December 25th. Since John’s birth comes after the Summer solstice, the days begin to shorten; light decreases as John wished his own reputation to decrease before the manifestation of the Lord.  After the Winter solstice and Christmas, the days will lengthen after the darkest hours, signifying John’s wish that Christ’s light should increase in the world and be our eternal radiance. 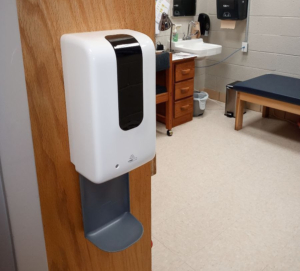 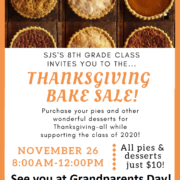